Here’s the scenario. It is coming up to Christmas and you’re in a design meeting. The topic for discussion is redesigning the navigation structure of Santa’s intranet. During the meeting you think, “Let’s base it around the different stocking fillers”. But before the words come out someone else has already said it. You rack your brains to come up with a different example, anxious that you’ll be categorised as “not very creative”. You think about what might resonate with users and suggest organising the content around Santa’s helpers—the Elves. Your colleague writes this on the whiteboard.

The meeting is silent. Everyone stares at the whiteboard for inspiration, but just two suggestions stare back—“Gifts” and “Elves”. Well, at least one of them is yours. 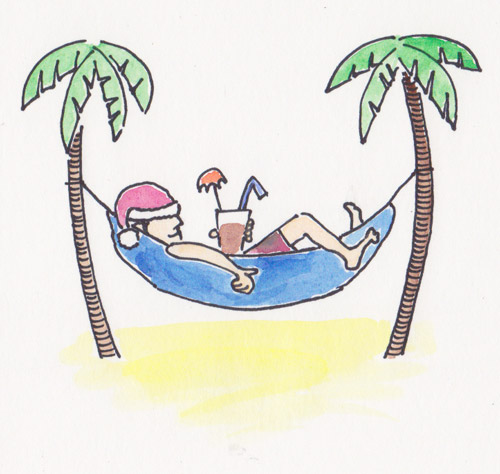 The truth is that it’s hard to be creative on the spot. However, there’s a technique for generating ideas in situations like this and it takes just a few minutes to learn.

In 1989, Richard Saul Wurman—the person who coined the term “information architect”—wrote a book called “Information Anxiety”. In it, he introduced the concept of the “5 hat racks”, that is, the 5 ways you can organise any kind of information. In the book, he writes:

“Information may be infinite, however… the organization of information is finite as it can only be organized by LATCH: Location, Alphabet, Time, Category, or Hierarchy. I’ve tried a thousand times to find other ways to organize, but I always end up using one of these five.”

By taking a few minutes to understand Wurman’s hat racks, you can learn how to generate ideas around organising web content to suit any context or scenario. Here’s how.

To organise content by location, you need to think of information in terms of geography or topology. For example, Facebook could organise your friends list by showing you where each of them is located. A web site that sells organic food could organise products by the part of the animal where the cut of meat is from or by the area of the country where the food is farmed. Santa’s intranet could be organised around the various workshop locations where gifts are made.

Everyone knows the alphabet, and that makes it an immediately accessible scheme for organising information. It probably won't be the only scheme you use—a web site that uses a Rolodex as its only navigation scheme might appear somewhat daunting—but it’s often a good secondary scheme. For example, Facebook could organise your friends list with an alphabetical list of names. Our organics food web site could organise products according to an A-Z of vegetables or meats. Santa’s intranet could use an A-Z of gifts.

The important issue here is to ensure that your alphabetical index includes the terms that people actually use. For example, if the elves are looking for woolly jumpers, you might want to include terms in your index like pullover, jumper, V-neck and sweater.

Organising content by time means thinking about the temporal nature of your information. The safety card on an aeroplane shows an evacuation guide as a storyboard. Facebook uses a timeline to show your friend’s activity and they could also show how much time each one has wasted on Facebook per day (although I suspect they won’t). Our organics food web site could organise products according to a seasonal calendar—spring lamb or winter vegetables—or by a cooking dimension like ‘time needed to prepare’. Santa’s intranet could organise information around tasks that need to be completed before the big day.

If you stare at any information for long enough, you’ll begin to see some obvious clusters or groups. Facebook allows you to create your own groups of friends. Our organics food web site could organise products in categories like “vegetables” and “meat”, or in terms of “ready meals” and “raw ingredients”. Santa’s intranet could be organised around people who have been naughty or nice. As with all of these organisational schemes, it’s clearly important to identify the categories that make most sense to your users. Categories are by far the most common way to organise content on websites and there’s even a dedicated tool—card sorting—that you can use to pluck the categories out of your users heads.

I think “Hierarchy” is a bit of a misnomer in Saul Wurman’s scheme. When I think of a hierarchy I tend to think of an organisational structure or taxonomy, with a set of distinct levels. But Wurman doesn’t really mean this. He wants us to think about ordering information in terms of magnitude such as by size, price or popularity. However, LATCM doesn't make as catchy an acronym as LATCH—that is why I think he chose ‘Hierarchy’ instead.

Putting them all together

If you’re an over-achiever, you could use all of these schemes at the same time. The image below shows the BBC’s iPlayer, demonstrating how they have organised the content by location (TV channel), alphabet (an A-Z of programmes), time (the television schedule), category (‘comedy’, ‘films’ etc.) and by hierarchy or magnitude (popularity). 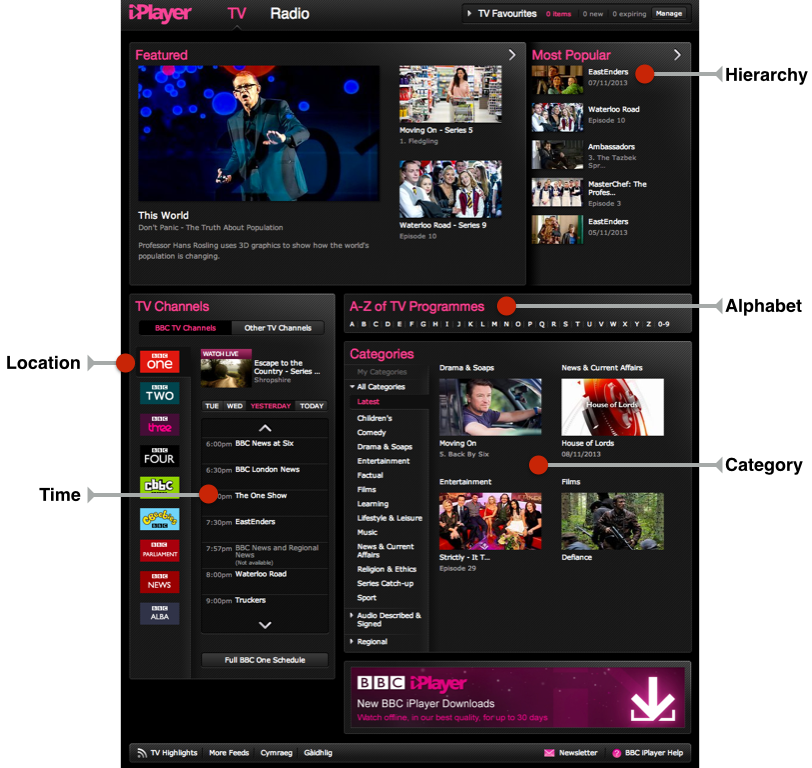 So next time you’re asked to generate some ideas for organising content, think LATCH. You’ll find it easy to come up with a couple of ideas per category which means you’ll get at least 10 ideas on the whiteboard rather than two.

I discuss the LATCH model and a lot more besides on my popular online user experience course User Experience: The Ultimate Guide to Usability. Sign up—it will be great to see you there! (Note: The discount offered on this course has expired).

Dr. David Travis holds a BSc and a PhD in Psychology. He works as a Chartered Psychologist at the User Experience Consulting & UX Training company Userfocus. David has worked in the fields of human factors, usability and user experience since 1989, and has published two books on usability.