My Most Memorable Usability Test Participants

In two decades of usability studies and research, I’ve met plenty of interesting people. I’ve learned a great deal from these interactions, often beyond the project at hand. I’ve been through many odd, amusing, interesting or frustrating participant situations. Over the years, a few of these interactions have stood out, but not always because of the substance of the research…

I’m not always great at remembering names, but I often remember faces. A participant walked in for a study, and I knew he looked familiar. I was sure I’d seen him in a study previously. After he left, I went back over my records and was pleased to find that I had accurately remembered him participating in a different study ten years earlier. I wonder if he remembered me!

Not too long ago, for a study with older adults, a man came in and immediately started telling me about his background as an immigrant to the United States (which had nothing to do with the study). That was fine, and I didn’t mind. However, as I struggled to get him to focus on the areas of the study, he proceeded to pull out an award for a children’s book that he had written many years ago, followed by an application for a patent. It was clear that this session wasn’t going to work out, so I thanked him, paid him the incentive, and told him the session was over. He told me that he thought I might think that he wasn’t smart, but he wanted to make sure I knew, and he hoped he hadn’t offended me. I felt bad that although he wasn’t able to focus or understand the tasks of the study, he was aware enough to understand that he didn’t complete his part in my research.

Several years ago, one of the participants for a study turned out to be an improv actor—a skill that seemed to extend beyond just his profession. As he talked about his background and his reactions to the website, his hands would go flying. He even stood up at one point to explain a point. While my webcam couldn’t capture everything (given the large amount of space he was using), I was hesitant to tell him to stay still since this seemed to be how he was most adept at explaining himself. I still got a lot of good video clips to share with the client.

About 10 years ago, when a participant for my study arrived, she looked vaguely familiar, but I couldn’t quite place her. Her name also sounded vaguely familiar, but it was a fairly common name. As the session went on, I struggled to figure out why she seemed so familiar. Towards the end of the session, I finally realised that she went to college with me, that we took a class together, and that we had even gone out once on a date – just one date, twelve years prior, nothing particularly memorable. As the session ended, I wasn’t quite sure what to say, so I didn’t say anything! Maybe she didn’t remember, or maybe she just wasn’t sure what to say too.

Early on in my career, before I had even considered making any kind of ID check part of the process, I was doing a study with a very particular and narrow career track that was extremely hard to recruit for. The client had also asked for an unusually large number of participants, making recruitment all the more difficult. A woman walked in and went through the session without incident. The next day, it appeared to me that the same woman walked in again for the study. I asked her if she had been part of the study before, and she said she hadn’t. I wasn’t sure whether I was being scammed by a participant coming in twice or if two participants with two different last names really looked almost exactly alike. As I probed more, it came out that she and her sister both had this obscure profession and it wasn’t identified earlier that they were sisters because of their different last names.

Although I had interned in a usability research lab in college, I hadn’t told my parents much about it. When, in 1994, I started actually working full time doing usability research, my parents were naturally curious about what I’d be doing now that I’d joined the working world. The first study that I worked on was for a nascent video on demand provider, and the criteria was pretty open: basically just having to be a TV viewer. Since I was just the logger behind one way glass for this study, and it wasn’t even known to participants that I was watching and logging in real time, I asked for permission to use my mom for the study. Everyone agreed, and my mother really enjoyed the experience and provided some of the most valuable and descriptive feedback for the study.

Adapted by Cory from a post available on his Blog. 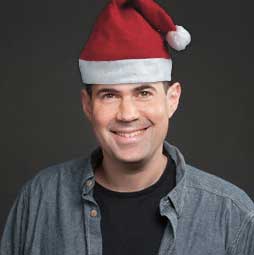 Cory Lebson, author of The UX Careers Handbook, has been a user experience consultant for over 20 years. He is Principal and Owner of Lebsontech LLC, a successful consulting firm focused on user research and evaluation, user experience strategy, UX training, and mentoring.  Cory also speaks and writes frequently on topics related to UX careers and practice, and is a past president of the User Experience Professionals Association (UXPA) International and of the UXPA DC Chapter.