The Heartwarming Story of Nelly & Neil

Hello, and Happy Christmas! My name is Paul Boag and to celebrate the season I thought I would tell you a heartwarming story of user experience design at this special time of the year. Are you sitting comfortably? Then, I shall begin.

Once upon a time there was a little old widow called Nelly. Nelly lived alone as her husband had passed away many years before and her children had moved far, far away.

Nelly lived a lonely life. She rarely saw anybody these days and found it increasingly hard to leave the house. But she’d discovered the internet thanks to her oldest son giving her an iPad for Christmas.

When she first started using it, it was mainly to talk to family via Skype, but over time as her confidence grew she started to use it more and more. She had even considered ordering her food shopping online as she found going to the supermarket was a very tiring experience.

However poor Nelly was afraid. Nelly had heard bad things about buying online and anyway she didn’t like the idea of some stranger turning up at her door. Even worse, she had heard that the delivery man would arrive with big boxes of groceries that she couldn’t possibly carry into the house. She had concluded that online shopping just wasn’t for her.

Then one day she was watching telly and that lovely Fern Briton from the morning show she liked so much was advertising something called Wiltshire Farm Foods. They delivered ready meals that looked delicious and everybody seemed so friendly in the advert.

Nelly still didn’t like the idea of ordering online but decided to look at their website anyway. What she found surprised and delighted her.

For a start they police checked all of their delivery people and she got to see a photo of her driver before he called. That made her feel much happier about having somebody deliver her groceries. They said they would even get the same person to deliver the groceries every time!

Not only that but she could pay cash on the door if she liked. No need to worry about credit card fraud. And so Nelly decided to give it ago.

When the delivery man called, who she later discovered was called Neil, turned up he offered to come in and unpack all of the meals into the freezer for her. He was so nice and because she know he had been police checked she decided to let him in.

Before he left Neil asked her whether she would like to order something for next time. Nelly was delighted she wouldn’t have to go to the website which she struggled to cope with sometimes.

Nelly became a regular customer and Neil felt like a friend who was always there to help. He even once put up a shelf for Nelly when it fell down.

Over time Nelly came to trust Wiltshire Farm Foods. Soon she was placing her order every week on their website, which was just such a pleasure to use. It never made her feel stupid or slow.

But one Christmas Nelly got ill. So ill in fact that she couldn’t leave the house. It was all she could do to stay warm and didn’t feel like eating anything. So she stopped ordering from Wiltshire Farm Foods for two whole weeks, something that was very unusual for Nelly.

One day there was a ring on the door and there stood Neil. He said he had been worried about her because she hadn’t ordered in a while so thought he would pop in. Nelly promptly burst into tears from relief for having someone who cared.

That is why Wiltshire Farm Foods have built a multi-million pound international business in the face of massive competition like the major supermarket chains who, to be honest, have more variety and can sell at a lower price.

So in 2018, I would encourage you to remember Nelly and to think a little bit deeper about what your users actually need. 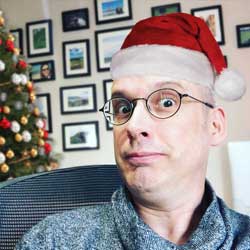 Paul is a leader in digital transformation and user experience design thinking. He has over 20 years experience working with clients such as Doctors Without Borders, Oxford University and the European Commission. He is the author of five books, many articles for industry publications, and is a well respected presenter. He has hosted the award winning UX podcast Boagworld since its beginnings in 2005. Through consultancy and training he helps organisations make better use of digital technologies.