Hello my friends, and Merry UXmas. My UXmas gift to you today is a little piece of wisdom that I learned some time ago, that has served me extremely well throughout the years. I'd like to share it with you today, with my hat and all.

People ask me all the time, “How do I sell the benefits of UX?” My answer is always some flavor of, “You need a small win fast, okay”? You need something that gets everybody on a positive note going, oh wow, okay, that really worked, that was really good. Because, you don't want to waste your time putting together slide shows and reports and case studies and things that are packed with facts and figures and financials. You don't want to hold 'Come to Jesus' meetings with the intent of getting everybody on board that UX-train.

It's a high minded ideal where you read about it all the time. We hear about it all the time. It sounds great in theory, it rarely works in practice. I've seen that advice just like you have, and the three decades that I've been doing this, almost three decades, tells me that, man, when the rubber hits the road, it falls flat. You can do all that stuff. You can preach until you're blue in the face. But, mark my words, no one is going to listen to a word of it.

Instead, you need to do something that's positive, that's realistic, that's achievable. Alright? It may be small, but it'll carry a lot more weight when it comes to convincing people in your organization to act on it, and convincing them that this UX stuff is worth spending time and effort on.

On a product level in an environment where speed trumps everything else, you don't have the time to tackle everything, right? That's reality. You're looking for things that have high impact, low effort. By way of example, I'm going to share a story with you that I related to a crowd in Canada a few months back. It illustrates this point. I'd like to take a moment and share that with you here.

What the clients often tell me is something like this. We need to completely redesign this system. I had a large organization I was working with where there was panic. This is extreme, right? But they were panicked, because, it's a B2B situation. They're selling services online, big money is or is not changing hands, and people are abandoning the transaction process at checkout. They get to step two and they bail. Something like 85% of the people that are going through the process were just bailing out at the second step. They're like, we don't know what's happening. We're talking to people. No one can give us any answers.

Their thing to me, is we need to overhaul this entire system. This is billions of dollars worth of work. Okay. I listened. I let them air it out. I let them get all their stuff out on the table. Then the first thing that I do is ignore that request. Instead, I ask them a question. What question do I ask them? You tell me. Why? Why is that happening? Do you know why it's happening? I ask it at least five times. I understand that you have all this stuff that you feel like needs to happen. Take a step back. Why is that occurring? Until we know why that is occurring, we're not spending a dollar on anything. Because, nine times out of ten, you'll wind up with the same problem you have right now.

Turns out, that the issue was solely in the checkout process. What their team had done, their product team had done, is instead of adopting any number of existing platforms for this, they custom created one. It ran counter to every checkout process you've ever seen in your entire life. How about this? You gotta, again, a very expensive product here. We're talking about a monthly payment, which essentially equals six figures a year. It's a product that's highly customized. You have to know what you chose, and you have to know what customizations you made to it at every point in that process, in order for you to feel confident going ahead and pressing that button and saying, “Yes. We want this.”

Step two, the title of the package, is gone. Just disappeared completely, nor was there a list of all the stuff that you just added to your cart. You don't know what you're paying for. Then, there's no opportunity to review those details, to review your order, until after you have checked out. Again, we're not talking about 20 bucks on Amazon here. I said, “Look. Fix these two things.” We looked a couple typical checkout processes, match this flow, get this data out there where it's there all the time throughout the entire process, so that there's continuous review and then there's an extra step, okay, review your order, here's what we got, here's what you're gonna buy, it's safe to press the button. Do that. Let's sit with it for three or four months and see what happens. Alright? Don't redesign anything. Don't change the way anything looks. Just do these things.

They did. It took them about two days. 200% increase in conversion, completed checkouts. Now. I get paid to be there. I can certainly hang out and say, “Yeah. We're gonna redesign the whole thing. This is gonna be two years. I'll consult with your team and I'll work with them side by side and I'll get paid a lot of money.” It's the wrong thing to do. It's the wrong answer. It's not necessary. It doesn't do me any favors, because after they do all that work and they still have the same problem, guess who's on the hook? We paid you all the money for all the time, and nothing changed.

This is the value of looking beyond what's asked, to figure out what's really going on. What actually needed to happen, is the teams needed to stop reinventing the wheel. That's what the real problem was. We have a tendency to look toward redesign, improvement, upgrades. It's natural for us. There are an innumerable amount of instances where it's just not necessary.

Pretty amazing, right? Hopefully what you see there is that a very, very small change, a step back to ask the right questions, and say, “What's really happening here in the first place, and do we really need to do all that stuff?” Pays big dividends, because a couple things are happening here. Number one, everybody is very happy from project managers to product owners to executives, to the development team at large. Everyone is really happy that they didn't have to do all this work. Number one. They're also very happy, obviously, with the result. 200% is nothing to sneeze at when we're talking dollars and cents. The first thing that happens is everybody realizes, wow, okay. I guess all that really wasn't necessary. 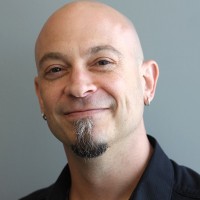 Joe Natoli has been preaching and practicing the gospel of User Experience to Fortune 100, 500 and Government organizations for nearly three decades. He is immensely passionate about the inherent power of UX and design and devotes half of his practice to writing, coaching, and speaking. The remaining half of Joe’s practice is dedicated to training Enterprise Design and Development teams, helping them integrate best practices in UX into their product development efforts. He has launched two successful online courses with Udemy, and his latest book on UX strategy and product improvement, Think First, was published worldwide on October 5, 2015.