Did I win? Did I get more points than other players? And did I get the 10 bonus points?

At the end of the iPad game “Ticket to Ride”, final scores are calculated for all players, including virtual players. The final scores are points earned or lost from succeeding or failing to connect cities via railroad tracks, as well as a bonus for having the longest continuous track.

The game is finished at this point, and the app could simply show you final scores … but it doesn’t. Instead, you get this dramatic process where you watch the computer tally the points for each player in succession, with your own points always tallied last. It’s a rather anxiety-inducing moment, watching the points bar grow longer (or shorter) based on each route. And oh, how the suspense builds …

The app could simply show you final scores for the game, but it doesn’t. What would be the fun in that? A quick reveal would kill the experience. Instead, you get a stirring, climactic end to a game you’ve invested a good deal of your time playing.

This is an experience designed to engage my emotions.

Why is this remarkable? There’s a mantra in the software world that faster is better. Faster load times. Faster responses. Indeed, there are studies showing increased retention or conversion simply from shaving a few milliseconds off load times. Google’s design principles place speed above most other things. Usability groups have long measured success in terms of efficiency and speed to completion. There is nothing wrong with speed.

Are there moments when intentionally adding a few extra seconds—however artificial—creates a better experience?

The experience of lottery tickets

I’m going to give you a lottery ticket. Or better yet, just give me some money and I’ll just tell you if you won or not (most likely the latter).

Would this be a good experience—reducing the lottery to a pure financial transaction? It would be an efficient experience, no doubt, but probably not one you’d like to repeat.

Consider the psychology of only revealing one number (of the five or six numbers) at a time. What does this temporal space allow us as individuals to do? Aside from the functional need to scan for a matched number on our own ticket(s), this space allows us to imagine and hope. More accurately, this space allows us to enjoy the experience of hoping we’ll win. Think about how many people will exclaim “I got one!” or “I’ve got two matching numbers!” How disappointing would it be to simply post the six numbers for all to check?

These little moments of hope, however unrealistic, are in themselves a reward.

This idea that pleasure comes from anticipation of the reward, and not the reward itself, is something that Dr. Robert Sapolsky has explored. In a talk presented at Stanford University, he shared a lab experiment done with monkeys that looked at spikes in dopamine, a neurotransmitter in the brain closely tied with pleasure. Rather than a spike of dopamine levels after a reward was given, the spike occurs just before the reward.

What was even more interesting was this: when the reward was only given 50% of the time, the dopamine levels went through the roof! In his own words, “dopamine is not about pleasure, it's about the anticipation of pleasure—it's about the pursuit of happiness, rather than happiness itself.” If we can understand the effect of these “maybe” moments on motivation, and apply this to our work, we’re tapping into some powerful psychology.

So, how are we doing at designing anticipation and suspense?

A few years ago, I started tracking the miles on my diesel VW, to see if I could get its mileage anywhere near what the commercials claimed. I chose a rather nice-looking app—one with more appeal than a simple math app for calculating mileage (points for aesthetic engagement!). 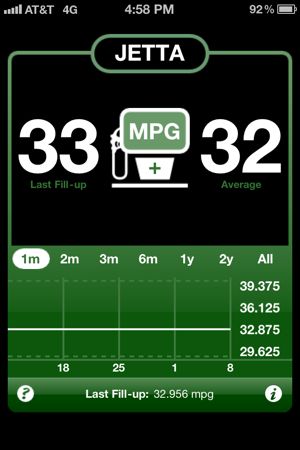 Whilst this app has a nice interface (woo hoo—it looks like a gas pump!), the designers have missed a key opportunity in design of the experience.

Walk with me through the experience.

Your tank is filling up and you’ve added the odometer reading. 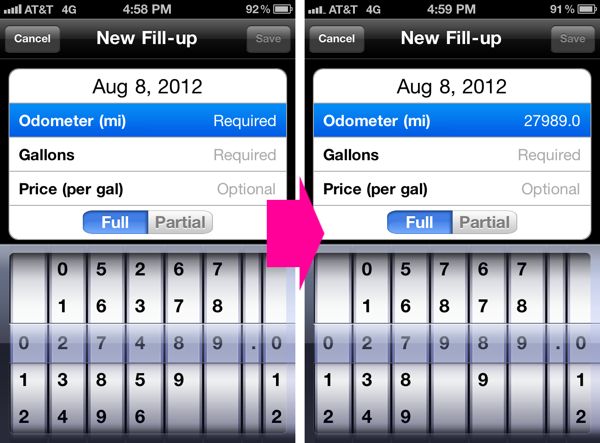 You’ve added the price per gallon (or liter). 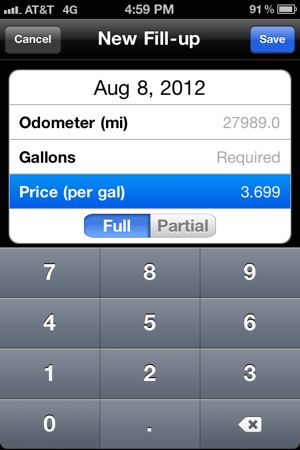 Waiting for the tank to finish filling up, so you can enter total gallons—the final, missing piece standing between you and the magical miles per gallon (MPG) number.

Maybe, while you are waiting, you look over the past month's average … or the past six months' average …

… wondering if you’re going to have a better or worse MPG this time round.

Click! The gas tank is full, and you can enter the gallons added. 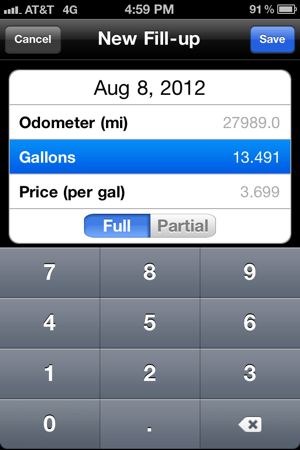 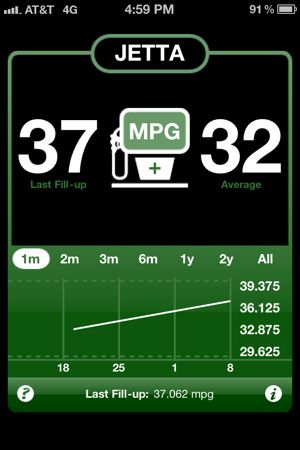 The calculation is so fast in fact, you wonder if anything has changed. No pause. No drumroll. No “How d’ya think ya did this time?” message for a brief moment. Nope. Just a cold, heartless calculation. A super-efficient calculation, mind you, but one devoid of any dramatic moments.

A few added seconds to build anticipation would make this a better experience. Just a few seconds of wait time is all it would take—maybe a spinner or a drumroll, a slow dissolve …

In film, editors spend a great deal of time focused on pacing. Since film is largely about creating an emotion in people, every detail, from lighting to camera angle to pacing is scrutinized for the intended effect, and how well the film accomplishes that effect. Game designers do the same thing, as do musicians, magicians, dancers, and public speakers. Nearly anyone whose focus it is to engage people in an emotional way, and who does so over time, thinks about pacing and this issue of rhythm.

My mileage app succeeds at providing a simple calculation. But if the goal is to design an experience (we are user experience designers after all!), pacing is non-existent. The app misses out on a great opportunity to create those few seconds of drama. Like the lottery or tallying points in a game, it could drag things out a bit, and be better for it.

Something worth waiting for!

Obviously you have to know when to add time—executed poorly, adding time could be very dangerous and frustrating. But, if you’re thinking about the experience unfolding over time, it should be easy to spot these golden opportunities.

Imagine part of your job is to choose which vendors will supply your hospital with all the equipment, supplies and so on needed to keep things operating. The decision is really hard and not just about who has the best price. Prices change over time. Longer contracts generally get you better deals. There are often several comparable options to choose from. Vendors offer better deals if you promise all your business will go to them. You can negotiate rates based on estimated spend (but how much you spend is hard to predict). All this boils down to a series of human calculations and judgements that take months to sort out.

The project I worked on was designed to bring all this online, making the process much more manageable. The pivotal moment in the experience, and indeed the core value of this app, is when the system recommends who should get your business.

Recommendations are made possible by a rather brilliant algorithm that crunches data ahead of time (usually overnight) so that calculations occur instantly. But why do so? Why push the recommendations instantly? This calculation needs to be celebrated, not undersold. Given all this, between the “show comparison” button and the comparison results page, I recommended this screen:

Think about our natural human perceptions—if something is fast, it must be easy. Quick is cheap. Fast food. Jobs done too quickly. Production times. Good things take time and are worth waiting for. So why load this data as quickly as possible? Why not introduce some artificial drama to heighten the appreciation of just how awesome this data is?

Hope and the holidays

There is perhaps no better time than now, this holiday season, to share these thoughts. Indeed, this theme of hope and anticipation is at the heart of the Christmas celebration, whether you’re celebrating the birth of Christ, gift giving, giving of ourselves, or something else.

What I recall most fondly from my childhood were the presents wrapped and placed under the tree—weeks ahead of Christmas morning. Not knowing what was in the package, combined with weeks of waiting, made the packages so much more desirable! Compared to the presents that might show up on the day of, or a few days prior, to Christmas, the ones I had to wonder about were always most thrilling. The gifts were great. But the waiting—and not knowing—was better. The pleasure was in the anticipation of these gifts.

As designers, it’s easy to focus on the user interface and transactions, but lose sight of the experience we are creating. The need for speed and effortless transactions is critical, but can also lead to cold calculations. Why not take a page out of game design and other fields, and delay the finale? Where it’s appropriate, let’s introduce a few moments of uncertainty and hope—it just might bring some delight to the tools we use. 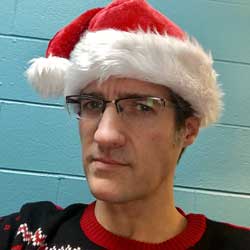